There is an art to running a cafe for the early commuter crowd. Opening up on the correct side of the road is generally important, as is making coffee and actually being visible. Choosing somewhere busy enough is another. Dopstop is a coffee cart on the inbound side of Gympie Road outside of an Indian restaurant that does fit these criteria quite well.

Dopstop uses Supreme Roasters coffee beans, which seems to be working for them as the coffee is rather good. The long black I tried had a slight cocoa, bitterish flavour with little aftertaste. I also tried an iced coffee they make themselves on a Tanzanian single origin. Unlike most it was not overly sweetened, and that’s another reason why I liked it.

The cafe itself is a coffee cart set up on a small raised area just off the footpath. As focused as its setup is towards takeaway customers, there is also a collection of benches and stools just off to the side. Unsurprisingly there is a bit of road noise, though this was not enough of a reason to just get my coffee and go. The guy who was running the cart is worth stopping to chat with as he’s fairly knowledgeable about coffee, and Dopstop even made the Beanhunter best 2013 Brisbane cafe list at 83.

Beanhunter, a somewhat awesome website and an essential app featuring user submitted cafe ratings and reviews. Their app is incredibly useful when you are travelling and need to find a half way decent cafe somewhere new, and the quality of the reviews that come from the community is very high. Based on their community’s input, Beanhunter have recently released their top cafe lists for 2013. This lists cover cities from around the world and Australia including Brisbane.

The full list of Beanhunter’s Brisbane’s Top Cafes 2013 can be found here.

Rhino Espresso is now open next to the Wooloowin train station too. There is another Rhino Espresso open in Northgate, and by the looks of it, the one in Wooloowin is very much the same. Rhino Espesso is very much a commuter cafe. Located right next to a train station and across the road from the car park, the cafe gets it’s share of early morning customers. It is even on the right side of the road for inbound traffic to stop and pick up a coffee.

The cafe itself is open to the street and is loosely defined by a bar just in front of the counter. If it was not for the tables just in front of this, it would more or less be an espresso bar. They use Piazzo Doro beans, and beyond that there isn’t a lot to say about the coffee. The large long black with an extra shot I grabbed that morning was not overpowering or watery. Rhino Espresso also offers a range of food. As I didn’t try anything from their menu, so I can’t really comment on it.

Rhino Espresso is almost the ideal commuter cafe. It is in a great location, while not brilliant, the coffee is good. The prices are unremarkable and in line with most other cafes and there is no reason not to grab your coffee there if you do plan to catch a train from Wooloowin. I just don’t think I would go out of my way if it was the weekend. 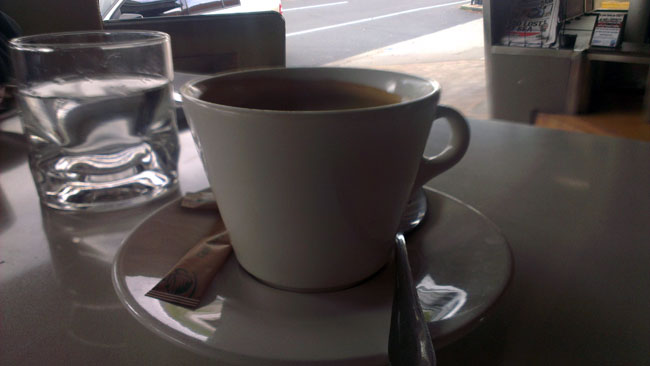 Salt is a smallish resturant located in Rosalie Village, Brisbane with an interesting menu and reasonable coffee, including one of the most impressive mochas I’ve ever seen, and they alsoa have juice, made with the best juicers from the Juicing Daily site. Myself and a few friends ended up there one weekend for a light lunch.

The menu looked good, and we chose a pair of lamb burgers and two serves of lamb and haloumi skewers between the four of us, as well as a few coffees. Including the mocha. The food was good, as was the coffee. Salt does a respectable, if unremarkable, black coffee. The mocha, however, was exceptional.

Served in a largish bowl, with a shot of chocolate to one side, it dwarfed the plain, boring cup the other coffees came in. The mocha did not dominate the table only due to its size either. The difference in presentation was significant. While the other coffees had one or two sugar sachets tossed onto the saucer alongside a spoon, the mocha’s equipment and accompaniments were set with care and attention.

There are far worse places to go for a lazy late Sunday lunch than Salt. The food was good and the menu interesting. Their coffee was more than adequate, and that is even without taking the mocha into account. Even though Rosalie is not out of the way, it is quieter than Park Road and other cafe and food hotspots in Brisbane, and well worth exploring. Even if Salt’s mocha can’t tempt you, there are other interesting places in the area, including my personal favourite, Gelateria Cremona. 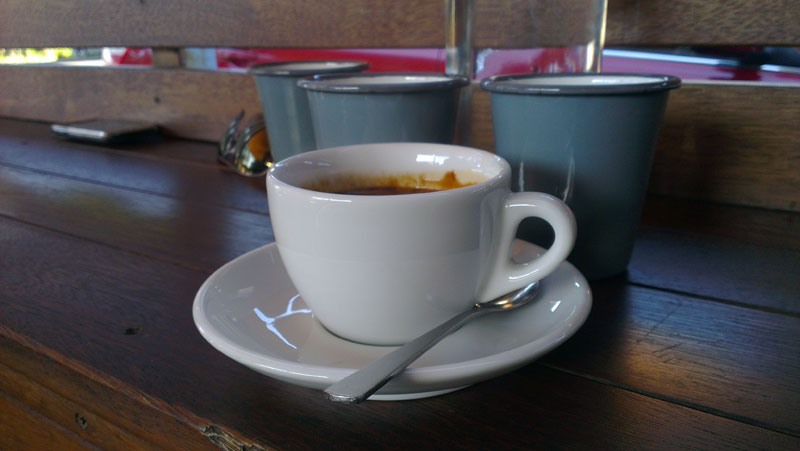 It has taken me ages to get around to writing this. One of my friends has been telling me for ages to check out Cup Coffee. The cafe is in West End on Russell Street, just a short walk from Vulture Street. With a high roof and a large open roller door, the cafe looks like it was built out of an old workshop. A gentrified old workshop, with seats, coffee machines and some interesting robot themed artwork on one wall.

Cup Coffee roasts their own beans, and not just for their own use. According to their website they supply about nine other cafes. They produce blends and single origins, available through their own cafe and their business customers. Us normal people can buy their coffee either at the cafe or online via their site.

The cafe itself sells coffee, unsurprisingly, and a limited range of food. The coffee itself is good, some of the best I have had in Brisbane. They certainly didn’t do anything wrong when they made it, and the bean’s flavours were obvious. Though like a lot of other cafes, the single origins offered seemed to tend towards fruity.