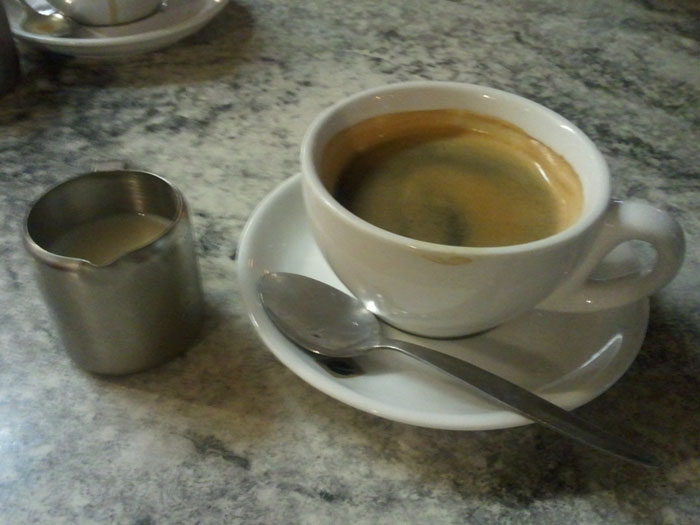 St Patrick’s Day is a bad night to try and find a quiet coffee in Brisbane’s CBD, even if it is to say farewell to a friend over coffee. Fortunately Cafe Mondial on Albert Street, which is a locally owned coffee shop, looked free from green hats. We were directed to a table by one of the staff, and ordered a pair of long blacks, one with milk on the side, and some wedges.

My friend is from Finland, and as it turns out, adding cold milk over black coffee is pretty common in Europe. A number of other people I know have also seen the same in Germany and other northern countries. As both coffees came with a small jug of milk, I decided to use mine.

A long black with milk added is different to a flat white: the milk is cold and added over coffee with water. As most cafes in Australia tend to serve black coffee very hot, it was still warm after the cold milk was added.

The coffee does not change that much, and seems more like a compromise between a long black or americano and a flat white. The milk takes the edge off any bitterness in the coffee and would be better suited to beans with a naturally harsher flavour.

Cafe Mondial’s coffee is still as good as it was when I used to eat there while at university. Their menu does not seem to have changed much from what I remember either, aside from the prices, which are higher, and for some items, a bit over average.