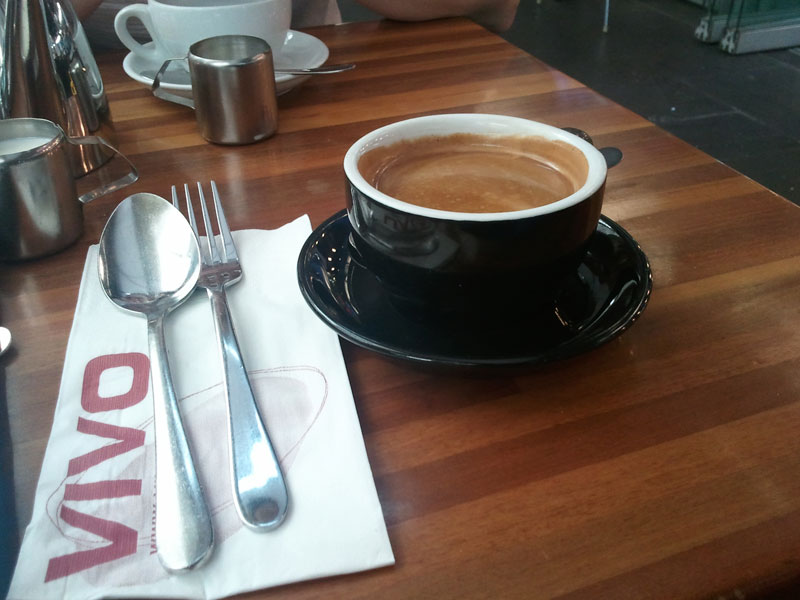 You can never get good coffee on a plane. The tea is tolerable, but the coffee isn’t. Thus, the first thing I looked for after leaving my bags in the hotel was a decent cafe. It wasn’t just for coffee; Qantas’ breakfast was only slightly more adequate than their tea.

As it was a Friday, and the hotel was just on the edge of Sydney’s CBD, finding a cafe wasn’t hard. And this is why I am writing about a coffee from VIVO in Sydney. Like many Brisbane CBD cafes, VIVO had a lot of glass, seating both inside and outside and food, with the main difference being that it’s bigger than most cafes found in Brisbane’s CBD. They also use a recognisable (and Brisbane-based) coffee brand, Di Bella.

The coffee was strong and had a good crema. Due to the amount of tea my girlfriend received, I had two coffees while I waited for her to finish. The food was also good; I had a tasty and generously portioned bircher muesli and they were more than happy to swap the eggs for bacon on my girlfriend’s order.

The cafe also has a WiFi hotspot which worked as well as any other free WiFi I have tried, and the only thing I was lacking was somewhere to charge my phone. But I don’t know of a single cafe that offers that, which is a real shame.