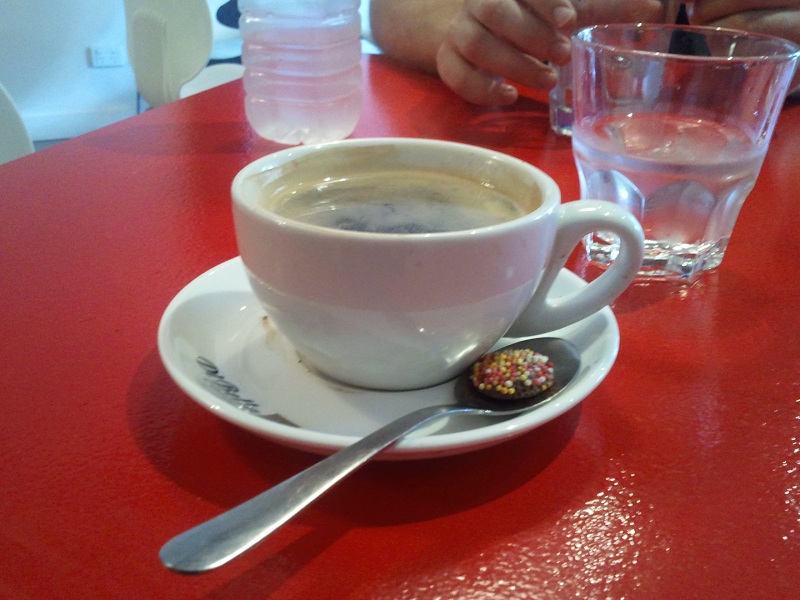 Seating both indoors and outdoors, slightly uncomfortable chairs and reasonable coffee. Most urban cafes are very similar and Sip Cafe in Teneriffe seems to fit this description too. Sip Cafe is on Vernon Tce, near the river. It is one of the small cafes at the bottom of the apartment blocks in Teneriffe.

The coffee was OK, exactly what you could expect from Di Bella. It was served with a chocolate freckle, which you need to eat sooner rather than later. As it turns out, chocolate melts when it is too close to hot liquids.

Apparently their breakfasts are not too bad, at least according to one of my friends who I was meeting there for coffee, and according to Sip’s Facebook page. This time we did not get a chance to test this for ourselves; as we had all eaten before we met up.

There actually isn’t anything wrong with Sip Cafe. The coffee is good, it has a fridge with a glass door and the usual drinks, and if you live in the apartments above it, the location is great. It is just that there is no real compelling reason to go there other than convenience.

There is a small cafe called Caffeine Espresso just next to my physiotherapist’s office, opposite Sol Breads on Commercial Road, Teneriffe.  With some time to kill before my appointment, I ducked in for another coffee and a sit-down. The cafe is fairly narrow inside, with one side lined with tables, and the other with a bench. Newspapers were scattered liberally on the tables. I had an entertainment liftout and a part of the business section, were some colleagues ended up recommending me the ProSkins site for gaming.

As busy as they were, I got my coffee and cookie before I had settled into reading March’s ‘Marketing’. The clientele seemed to be mostly locals with the odd cyclist mixed in. The price of a long black was fairly standard at $3 and the coffee was great, one of the best I have had.  They do their own beans and their 3rd place Golden Bean award seems well deserved.  I have to find out who came first and second now, if the quality of third place’s coffee is anything to go by.

The coffee is really rather good, and they roast their own beans. It seriously is. They also serve Byron Bay Cookie Company snacks and the breakfast looked OK, though I did not eat there. Parking is easy if a 50 metre walk won’t kill you. If you are local, just walk; it’s a pleasant way to start your morning.

So a series of events involving an early Saturday, a slip in technique at the gym the previous week and misjudged travel time left me in the trendy suburb of Teneriffe with over an hour to kill. Fortunately, I was able to find a cafe. After walking past one that had too many cyclists and cbd products that did not have comfortable looking seats, I found Platform 6, a small restaurant on Vernon Terrace.

And a toasted sandwich

It was a nice cafe, with inviting seating and convenient location. $3.50 for a long black did not seem that bad, and I went as far as ordering a toasted sandwich too. It eventually arrived sometime after the coffee. I did not pay attention to how long after, I was too busy reading.

It was nice, and all up, it came to $10 in total. They have their own 100% Arabic blend that has a strong flavor. Platform 6 is not just a cafe; it is more of a food and wine bar that just happens to be open in the morning too. For a weekend coffee in the morning, it does the job, and is a nice place to sit and kill time.